Two years ago Covid hit, sending the US apparel industry into chaos with global retail closures and huge supply delays weighing on imports. 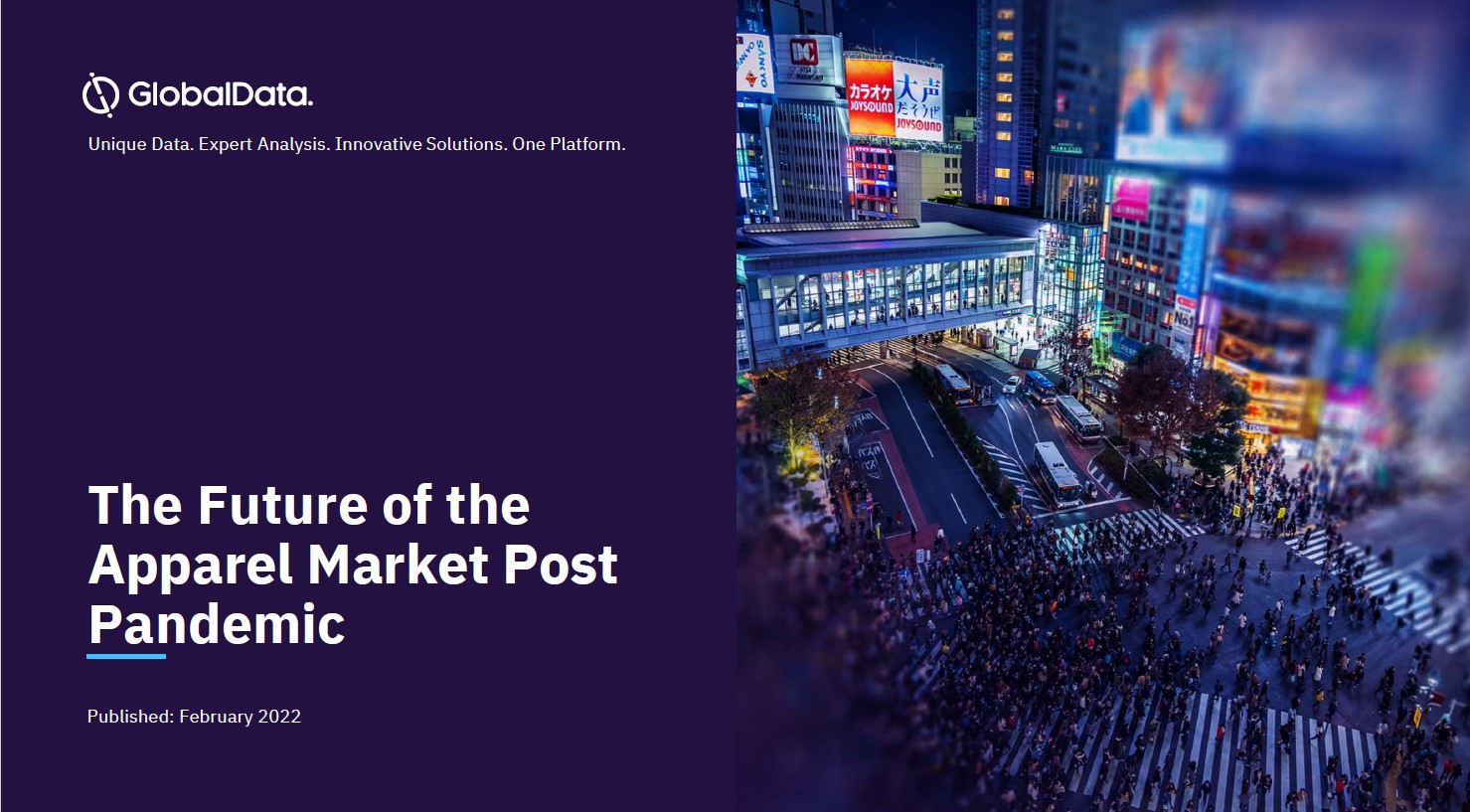 Thank you. Please check your email to download the Report.

The reliance of clothing brands and retailers on China became painfully obvious. With the Chinese government ordering factory shutdowns, many brands and retailers were stuck – either with their finished goods in China, or raw materials destined for other locations from China, severely delayed.

Sourcing diversification became the new buzzword – everyone wanted in – or out actually, of China.

Analysing apparel import data from the US Office of Textile and Apparel (OTEXA), we see that in 2021, China’s apparel shipments to the US inched up by 0.45% to 11.13bn on pre-Covid levels. Conversely, the likes of Cambodia, Pakistan and India witnessed sharp rises in shipment volumes.

Bar Honduras, El Salvador and Indonesia, analysis of the OTEXA data shows US apparel imports from all of the top ten major sourcing destinations surpassed pre-Covid levels in 2021.

But the beat goes on. Two years post-Covid and the global apparel sector is facing a wealth of other issues from shipping delays, disruption in transport, increased sourcing costs to huge market uncertainties.

The whole sourcing landscape is different now points out Dr Sheng Lu, associate professor at the Department of Fashion and Apparel Studies at the University of Delaware.

He says: “For many companies, their priority shifted from “chase for price” to “chase for products.” This explains why US companies’ apparel sourcing bases in 2021 overall became even more diversified than before the pandemic,” states Lu noting that the total market shares of the top five suppliers to the US dropped to 60.6%, the lowest since 2018.”

The race to diversify sourcing

According to the US Office of Textile and Apparel (OTEXA), Pakistan’s apparel shipments destined for the US overtook pre-Covid levels in 2021, jumping 49% to 895m SME compared with 599m SME in 2019.

Pakistan’s holding might be in the lower quarter of the top ten suppliers but it has been steadily increasing since 2018. In fact, its 2021 holding marks its best performance since Just Style started monitoring OTEXA data in 2010. After China, it was the most competitively priced apparel supplier to the US in 2021 on a price per unit basis, at $2.48 making it attractive to buyers.

There are so many other attractive features of it as a sourcing base. It offers flexible minimum order quantities (MOQ); it is increasingly stable; and the government has worked to solve electric power shortages and allow duty-free access to new machinery.

But it remains eons behind China when it comes to the actual size of its imports. The question is will it ever catch up? The same could be asked of the likes of Bangladesh and India and Cambodia.

Lu warns not to be fooled into thinking the players whose shipments grew significantly have suddenly become more competitive or more suitable sourcing bases.

“Instead, it was more likely that fashion companies struggled to find enough production capacity to fulfil their sourcing orders.”

“Once the pandemic hit, it was obvious to everyone in the trade that ease-of-sourcing does not translate into effective risk management. Indeed, the best way to mitigate risk is to diversify sources of supply,” highlights Antoshak.

That will remain a theme for the foreseeable, he explains.

He says: “Pakistan, Bangladesh and Cambodia all offer competitively priced alternatives to China. For certain, the industries in these countries are at different levels of development, but all three have already carved out significant portions of global trade in major apparel categories.”

Any match for China?

“As with all sourcing decisions, these countries offer a wide range of products made at different specs at a competitive price. The key to working with Western buyers is presenting a compelling product offering that meets the buyer’s needs in terms of quality, price and delivery times. Another important factor is reliability. Suppliers in each of these countries have made great strides regarding reliability in recent years – even when taking the pandemic into account,” Antoshak adds.

But the real issue centres around scalability.

“When one considers the sheer size of China’s installed supplier base, transferring the equivalent production elsewhere is a tall task. Moreover, it took years for China to build its industry. It will also take years for other suppliers to scale up to meet demand should sourcing from China continue to wane.”

Do US post-Covid apparel imports suggest nearshoring is being realised?

Apparel shipments to the US from El Salvador and Honduras were lower in 2021 than they were pre-Covid in 2019, which is interesting considering the Biden Administration’s recent push on nearshoring production.

But when you take a microscopic view of the OTEXA data into just codes 61 and 62 – apparel and clothing accessories; knitted or crocheted and apparel and clothing accessories; not knitted and crocheted – one of the most notable jumps in shipment volume to the US in 2021 came from Mexico at 33.82% in 2021 from 2019. El Salvador and Honduras, however, still remain at the bottom end of the table in this dataset as analysed by GlobalData.

But is this a trend for the foreseeable? Are those two countries so rocked by Covid that their imports to the US won’t recover? Lu rejects this, adding there are more factors at play here.

“Several studies suggest the pandemic hurt some countries’ economies (including production and exports) more significantly because of their limited healthcare resources or more serious Covid situation…Understandably, it could also take longer for these countries’ apparel production and exports to fully recover to a pre-Covid level. As an encouraging sign, US apparel sourcing from these two countries enjoyed a 28% and 33% growth in 2021 year-on-year (by quantity), suggesting a sound recovery.”

Antoshak concedes: Any reallocation of sourcing back to the Western Hemisphere will take time. One can’t throw a switch and have an industry which has been whittled down over the years come storming back overnight.

He adds: “However, the migration issue has caused political problems for the Biden Administration. In turn, their response has been to assist countries like Honduras and El Salvador to attract more investment to rebuild their clothing sectors. The policy, of course, presupposes that new investment will create more jobs and ease the migration of people to the US borders. Time will tell – and that’s the point, it will take time to see if this policy is successful or not.”

Xinjiang bill could be a big opporunity

Lu points out that 2021 was not a bad year for Chinese textile and apparel exporters targeting the US market.

But that could all change.

“The newly enacted Uyghur Forced Labor Presentation Act could be a game-changer in 2022,” says Lu. “US fashion companies may find it not operationally viable to source many apparel products from China, depending on the new law’s detailed enforcement strategy to be released by the US Customs and Border Protection (CBP).

“Further, due to the escalating political tensions between the two countries, US fashion brands and retailers could take another look at their China sourcing strategy to avoid potential high-impact disruptions. Although a total decoupling seems not too feasible in the short term, it is a legitimate question for fashion companies: What an unstable China means for their sourcing from the Asia-Pacific region and what the contingency plan will be. The Russia-Ukraine war makes the question even more relevant and urgent.”

Antoshak adds: “When Xinjiang forced labour allegations became front-page news and now with US Customs enforcing new laws in the US prohibiting the importation of goods made in Xinjiang or goods made with raw materials (like cotton) from Xinjiang, western buyers had little choice but to consider other sources of supply.

“Moreover, with importing companies now subject to withhold release orders, there are practical issues at stake. Indeed, the seeming randomness of seizures at US ports not only delays shipments, but adds further uncertainty to supply chains that have not been challenged like they have over the past two years or so. It’s an added layer of complexity that only increases an importer’s risk.”

Mexico’s apparel associations for one are banking on a bright future with China losing the confidence of international regulators, governments and trading partners over its failures to protect employee rights, banish child labour and illegally produced counterfeit goods.

“This is an opportunity that must be seized by Mexico, especially by keeping up with the demand for raw material and supplies,” says Guillermo Romero, executive president of APIMEX (Asociación de Empresas Proveedoras Industriales de México.

If this happens, Mexico exporters can take advantage of the US government’s current budget plans involving US$6trn in spending and more on longer term investments. These, he says, “open great opportunities.”

Antoshak notes for apparel sourcing hubs closely located to the US to benefit, they must position themselves correctly as investment and rebuilding will bring these countries back as major suppliers to the US market.

“When trade expanded rapidly around the globe with the end of the Multifiber Arrangement (the old quota system), and the establishment of the World Trade Organization, which encouraged a rules-based expansion of trade, regions like Central and South America, as well as Mexico were left to fend for themselves in the competition for business from Western buyers. Prices often won out over anything else. But countries in this region have proximity in their favour. After the supply chain chaos over the last couple of years, many buyers are searching for sources of supply closer to consuming markets, presumably less vulnerable to supply chain shocks. Another factor is environmental: Shorter shipping distances translate into lower carbon emissions, a goal of many western brands as they look to become more environmentally sustainable.”

Click here to read Just Style’s analysis of the rate of recovery since the start of Covid for the top ten apparel suppliers to the US.

View All
View All
Features

How to win at the trending slow fashion movement